The Disinterested Witness: A Fragment of Advaita Vendanta Phenomenology

The Disinterested Witness is a detailed, contextual, and interpretive study of the concept of saksin (or that which directly or immediately perceives) in Advaita Vedanta, and a fascinating and significant comparison of the philosophies of the East and West. Central to its topic is its comparison of the Advaita notion of witness-consciousness with similar notions in Western phenomenology.

Gupta explores the phenomenological relevance of the concept of saksin in Indian philosophy, while at the same time demonstrating that the notion of witness-consciousness is essential for any sound theory of knowledge. Addressing a wide range of epistemological issues and dilemmas, as well as the perceived commonalities and differences between Eastern and Western philosophy, The Disinterested Witness is a major contribution to comparative philosophy, and forms a vantage point for cross-cultural comparison.

Bina Gupta’s The Disinterested Witness: A Fragment of Advaita Vedanta Phenomenology is the companion volume to Perceiving in Advaita Vedanta which I reviewed previously here. Of the two books the first published is the more satisfactory in that the focus is tighter, following as it does the classic text Vedanta Paribhasa of DharmarAja AdhvarIndra. Her hand as it were was being held by the master. In the present text she is attempting to follow the rather complex treatment that is given to the topic of the sAkShin or witness. Readers of V.P. will recall that the distinctions that operate in relation to the sAkShin are complex and that there is, so to speak very little room to maneuver.

‘Now the individual self is Consciousness limited (avichChinna) by the mind and the witness in that is Consciousness that has the mind as its limiting adjunct (upAdhi). The difference between them is that in the former the mind is a qualifying attribute (visheShaNa) and in the latter a limiting adjunct. A qualifying attribute is that which differentiates, is present, and is connected with ( what is predicated in respect of) something related to it; while a limiting adjunct is that which is differentiated and is present but is not connected with the predicate in respect of something related to it.’

You can see the difficulty that B.G. faces in trying to pick through the various approaches to the concept of the sAkShin. It is the Russian doll effect. You have the individual self and the individual sAkShin and the mind and how all these are related to Consciousness both as particularized and as universal i.e. consciousness and Consciousness. Remember that I am using a spatial metaphor which is not adequate to the subject except after an analogical fashion. In the first instance Consciousness is made captive by the individual mind. This gives the impression of an individual self, the basic adhyAsa. Consciousness has this definite shape much as we can assert that any surface must be colored. Mind as established must now, in order to develop the perceptual mode for knowing things without being those things, develop the sAkShin which is pure consciousness with mind as a seeming individualization of it. (Mind it will be remembered in the Advaitic system is inert) Even though Consciousness as one without a second is not affected by the mind it takes the apparent taint of individuality in the way that a crystal in the presence of a red rose becomes rosy in color. Consciousness in reality is not particularized and therefore the witness is not essentially particularized however its association with the individual mind makes it individual.

‘This witness in the individual self is different in each individual. For if it were what Maitra has known, Caitra would also recollect’.

In his note to this section of Vedanta ParibhAshA the translator of the Advaita Ashrama edition, Swami Madhavananda, writes: ‘Although the witness is the same as Brahman, yet since it manifests itself as possessing the limiting adjunct of the mind, it is considered to be different according to different minds.’

Professor Bina Gupta approaches the explication of this difficult element in Advaita in exemplary schematic fashion, laying out what she is going to tell us and then telling us it. The first chapter is by way of introduction to the concept. The second chapter traces the development of the concept starting with the Upanishads. The third goes on to look at Shankaracarya’s treatment which has a certain fluidity about it. sAkShin can be Consciousness as unlimited and also in the individual limited by the inner sense. The fourth chapter is a more discursive elaboration treating the concept as it becomes more defined in later advaitic thinkers. Here the student who has limited access to those thinkers in the original Sanskrit will gain an appreciation of the subtle differences in their views. Suresvara, Sarvajnatma Muni, Padmapada and Vacaspatimisra are selected for close attention. The fifth chapter is concerned with the nature of sAkShin in relation to Atma, jIva and Ishvara. The final chapter of the book is an attempt to relate the concept of sAkShin to similar notions in Kant, Husserl, Freud and Sartre. Professor Gupta has done a lot of work in Phenomenology. This is particularly aimed at the student of philosophy who would be interested in placing Advaita in the context of approaches to basic questions such as ‘what is knowledge’, ‘what do I know’, ‘how do I know’ and ‘can there be certainty in knowledge’.

Some highlights for your consideration. In the chapter on Shankara she pays close attention to the critique of the Vijnanavada in Brahma Sutra Bhasya II.ii.28. Here the concept of the sAkShin as central and opposed to the notion of self-luminous cognition is unequivocally stated. It is as though a rock which is inert could know itself as a rock. No more then could the mind know itself as mind or take the form of the object and know itself as that object. This is to be distinguished from the concept of the vRRitti or mental modification which is perceived by the sAkShin.

‘Mental cognitions cannot reveal themselves because they are inert as well. Hence, the need for the self-luminous witness consciousness to reveal mental cognitions. This witness is an eternal seer whose sight is never destroyed. In short a cognition points to something beyond it, to a cognizer. All cognitions need a basis, and that basis is the unchanging seer.’

The very interesting concept of the unknown object, aj~nAtasatta, is given extensive treatment by Gupta. This is a notion that is, as far as I know, unique to Advaita and was developed by the later thinkers. Understanding it is the GT road to the advaitic theory of knowledge. What is it that can be an unknown object, that can have unknown existence? The answer to that is anything other than illusory objects, subjective mental states and ignorance itself. Advaita rejects the view that knowledge confers existence on things or the Berkelean ‘to be is to be perceived’ technically known as Immaterialism and the allied position of Subjective Idealism. Very many self-styled advaitins/non-dualists are not a million miles away from these positions. In relation to the much discussed problem of illusory objects the notion of the unknown object comes into its own. Says Gupta in a succinct definition:

One caveat I would have is about her treatment of the going out of the mind to the object, taking its form etc as detailed in Vedanta Paribhasa. She regards this as metaphorical and is more led by a psychological understanding of perception. This is in my view problematic for the simple reason that the psychologist assumes that the mind is conscious, that memory resides in the brain etc. This is a confusion of the psychological and the metaphysical. The metaphysical asks: What is the nature of the object such that there can be awareness of it as it is? The representative realism of the psychologist cannot answer this question, indeed it makes no sense to ask it as all we are aware of is what is in our ‘head’ i.e. sensory input. The object in this view is strictly speaking an inference from our sense data.

It would be interesting to contrast this with the intriguing position of Henri Bergson as delineated in Matter and Memory published in 1896 but this is not the forum for such a consideration.

Professor Gupta’s last chapter which is a comparative survey is interesting although of necessity curtailed. ‘How long is a piece of string?’ is the parallel question to what the suitable depth and length of these treatments is.

On the whole this survey of the advaitic literature on the sAkShin is clear and not overwhelmed by detail. 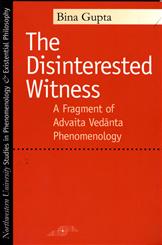 Advaita: The Truth of Non-Duality

The Essence of Vedanta: The Ancient Wisdom of Indi..

Awakening to the Dream: The Gift of Lucid Living

The Disinterested Witness: A Fragment of Advaita V..

The Essence of Vedanta: The Ancient Wisdom of Indi..

Knowing Beyond Knowledge: Epistemologies of religi..

How To Tell Hinduism To your Child?